Regulation of Food Intake by the Gut-Brain Axis: Role of Macronutrient Composition and Food Structure 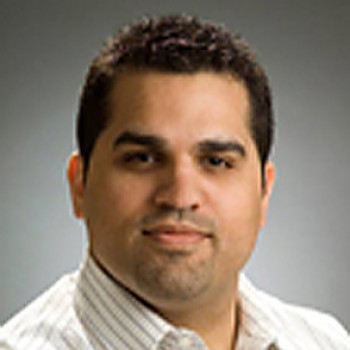 Associate Professor and Director of the Nutrition Discovery Labs in the School of Nutrition at Ryerson University. Dr. Bellissimo received his B.Sc. (Honours Science) and B.Ed. (Science Education) at York University and his M.Sc. and Ph.D. in Nutritional Sciences from the University of Toronto. Following postdoctoral training at the University of Toronto and The Pennsylvania State University, he returned to Canada and established a research program dedicated to advancing our understanding of human ingestive behaviour and determinants of food intake control. He has superb leadership in the design of experimental trials related to diet and exercise, and in the design and testing of novel food ingredients and formulations on satiety, and biomarkers related to health and disease.

Since 2009, he has led an independent, externally funded research program from both federal and food industry sources, and has trained over 50 high quality personnel. Dr. Bellissimo is the the recipient of the Deans' Teaching Award for teaching excellence and achievement in instruction (2014), and the Sue Williams Excellence in Teaching Award (2016). He is also a member of several journal editorial boards, scientific adviser to government agencies and institutes, and the food industry.

Food intake regulation is a complex process involving many overlapping physiological and psychological signals to the central nervous system. These signals arise from perception, ingestion, digestion, absorption, and metabolism of nutrients. The role of the gut-brain axis in the control of food intake was first described in 1973 by Smith and Gibbs who observed that exogenous cholecystokinin, a hormone released by the small intestine in response to food ingestion, when given just prior to a meal, produced a potent, dose-related, behaviourally and chemically specific inhibition of food intake (grooming, sniffing, decreased locomotion, and then sleep) normally observed in rats after a meal. Research in this area was been greatly amplified when it was discovered that cholecystokinin receptors were expressed in key brain regions that control food intake, and the presence of macronutrients and their breakdown products in the small intestine modulated cholecystokinin release. Over the last 40 years we have significantly advanced our understanding of the neuroendocrine pathways regulating food intake. In this presentation, the effect of macronutrient composition on satiety (subjective feeling of reduced desire for food) and short-term food intake via the gut-brain axis will be described first, followed by an examination into food structure optimisation and how it may assist in exploiting the physiological regulatory mechanisms controlling appetite and energy intake.