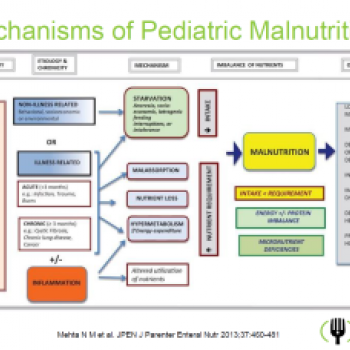 This webinar series, sponsored by Abbott, will describe two specific strategies the CNS Canadian Malnutrition Task Force is pursuing to advance the malnutrition agenda in Canada.

Evaluation of nutritional status and provision of adequate nutrition are crucial in the management of hospitalized children during illness because malnutrition is common and is associated with adverse clinical outcomes. Although growth and development are key considerations in pediatrics, a child's nutritional status deserves more attention during hospitalization and follow-up. It is therefore important to increase awareness about pediatric malnutrition and this is one of the tasks of the Pediatric Working Group of The Canadian Malnutrition Taskforce (CMTF). A national survey was sent to RD's, MD's and RN's in all tertiary paediatric hospitals in Canada and addressed all pillars of malnutrition care of hospitalized children (screening, assessment, treatment, monitoring and follow-up). It aimed to obtain knowledge about current practices on the management of disease-associated malnutrition (DAM). Key findings based on 120 respondents were a lack of overarching protocols for screening, assessment and treatment of DAM and a lack of standard practices after a positive nutritional risk screen. Important items related to screening were found to be weight changes, BMI, impact of condition and changed intake. Intake monitoring was reported to be done infrequently and mostly in malnourished patients; the method most often used was calorie counts. Common barriers to adequate intake were identified as interruptions of feeds, pain/symptoms and poor appearance/taste of the food. The survey has informed the CMTF Pediatric Working Group on the development of a Pediatric Integrated Pathway for Nutrition in Acute Care (pINPAC). Other methods used to inform the pathway development include a face-to-face meeting and multiple modified Delphi rounds among experts in pediatric care.

Dr. Jessie Hulst is a staff gastroenterologist in the Division of Gastroenterology, Hepatology and Nutrition of The Hospital for Sick Children in Toronto and an Assistant Professor in the Department of Pediatrics of the University of Toronto. Before joining Sickkids in July 2018, she was a Staff Gastroenterologist in Erasmus Medical Center, Sophia Children's Hospital, Rotterdam in the Netherlands, from 2011-2018.

Jessie obtained her PhD on the topic of nutritional assessment in critically ill children in 2004, and has been involved in both national and international research about this topic since. In 2009, she developed a simple nutritional (risk) screening tool (STRONGkids), which is used in multiple hospitals around the world. Her recent research interests are also focused on nutritional status and body composition in relation to disease in various patient groups. She has published > 70 peer-reviewed manuscripts and >10 book chapters.

Furthermore, she was involved in several national and international working groups related to pediatric nutrition, e.g. member of Committee of Nutrition of ESPGHAN, chair of ESPGHAN working group on Clinical malnutrition, and member and secretary of committee on Nutrition of the Dutch pediatric association. As the Chair of Pediatric section of the Dutch Malnutrition Taskforce she was involved in the development and implementation of a nationwide pediatric malnutrition pathway. Furthermore, this group was able to collaborate with the Dutch Health Care Inspectorate of the Ministry of Health to develop two mandatory Quality Indicators on pediatric malnutrition in Dutch Hospitals.

In Sickkids, Jessie is currently running a complex Nutrition clinic and EoE clinic, she is the hospital PN medical lead and the chair of the Nutritional Advisory Committee. She is also the co-chair of the Pediatric working group of the Canadian Malnutrition Task Force and working on the design and implementation of a pediatric Malnutrition Pathway in Canada.

This webinar is sponsored by Abbott.** Original Source: